I'm going to start by saying something jaw-droppingly controversial: I don't think the weather has been that bad this Spring. There, I said it. OK, it's been massively changeable, we've had rain, we've had sun, and now I've actually caught a cold... but actually when it really mattered, for me at least, it's been nice. Please note that both Bank Holidays have been lovely, with rain either side. During the last one, I decided to have a small barbeque among the bluebells in my garden. I baked bread buns made from a Danish rye flour, mixed with fluffy white flour, bought meat from Ginger Pig, including that sausage spiral down here, and little, multi-coloured peppers that we grilled along with slices of hallumi cheese 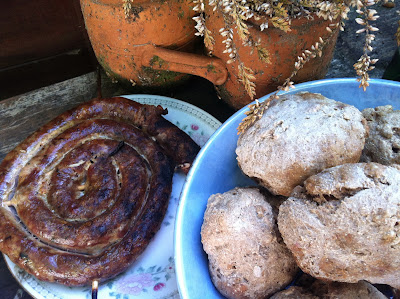 And finally, I made an unusual version of the Polish "mizeria' salad, which was pretty great, even if I do say so myself 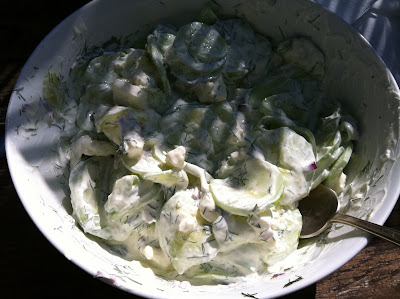 You slice the (peeled) cucumber paper thin, and cover in salt. After 10min squeeze out any excess water. Chop the onion very finely also and add to the cucumber slices. Blend the sour cream with the chopped dill and pour over the cucumbers. Mix together delicately but thoroughly (you may have noticed that there is an art to this). Crumble a block of feta on top. This salad is good with all meats or just crusty bread, tzaziki-style 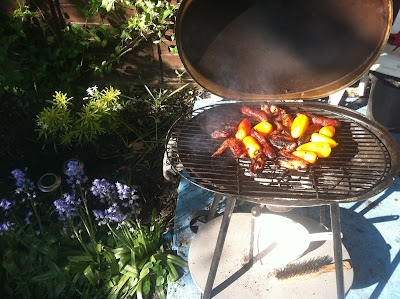 We bathed in the sunshine, marveled at the bluebells, drank sangria as usual and stuffed our faces with charred meats, saying how "rustic" it all was and how very sophisticated. Then Mike asked me for a napkin and I handed him the bogroll. Not quite there yet then...