When I was working all the time I imagined that having free time in London would be massively productive. In actual fact, I have become a cat. I sleep, I sunbathe, I eat, I meditate, I run in the park, make love and stretch, write a little bit. OK, so cats don't write, but you get the picture. I thought that I would be blogging every day, but no, I am too busy stretching and meditating, apparently this can  take entire days. At times I feel that familiar, suffocating feeling start to creep in - guilt. I then remind myself that I had been working full time for over 8 years, that I deserve to live a little, even a lot, that life is short, that I need to enjoy my freedom, and I try and let that suffocating feeling go, to feel grateful that I've had this beautiful Summer in London. Being brought up a Catholic, it's not easy letting go of guilt, but I won't give up trying. I want my actions to come from a place of love, and not of guilt or any other negative emotion. I'm still cooking all the time, but right now it always seems to be late at night, when I can't take good pictures. Yesterday, I finally managed to cook something before the sun set - it was these lovingly stuffed courgettes 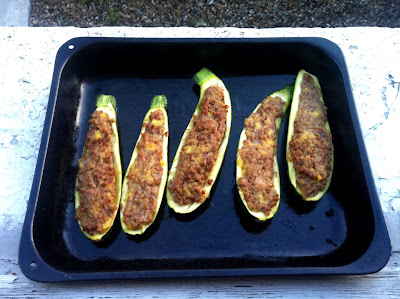 They seem Middle-Eastern in flavour with the lamb and cinnamon flavours, yet this is a (heavily modified) Polish recipe. Often these two worlds meet in the kitchen, due to many factors - Arab traders in the Middle-Ages swapping spices for amber from the Baltic sea, Jewish and Armenian influences from the movements of people through this land over many centuries, and constant wars with the Ottoman Empire when Poland was still great... 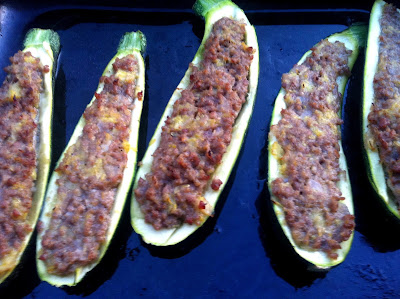 Wash and dry the courgettes, then slice them in half and scoop out the insides carefully (I used a small, sharp knife and my fingers). Chop these bits and blanche in boiling, salted water for about 5min. Meanwhile, chop the onion as finely as you possibly can. Fry it in the olive oil, then after 10min, add the lamb mince. Use a fork to mash these together while they are cooking. Add the cinnamon, salt and pepper. Keep mashing and cooking for about 5min, then add the drained courgette meat. Cover and allow to simmer for about 10min, then take the lid off and keep mashing. Finally, remove from heat and add a tablespoon of breadcrumbs to soak up the juices. Allow to cool slightly before stuffing the courgettes with the mixture. Bake for 30min at about 150 degrees C, serve with white rice