I have been traveling for ever now it seems like. Living out of a suitcase, waiting for delayed planes, lost luggage and suspected terrorists. Meeting friends in unlikely places, swimming in any bit of water I can find, whether it's a sea, ocean or an unexpected lake. Eating pastas and pizzas in Italy, oysters washed down by plenty of wine in Napa and San Francisco. Some tacos and beer too. Quite a few burgers. The last time I properly cooked was in LA, when I made healthy stuff for Simone and myself every day. This was a particularly well-turned-out salad with some of those small red and yellow peppers (they should be called baby peppers but they're not as far as I know), a large red onion I found lying around the fridge and some warm, crunchy home-made croutons. There is really nothing in the world like home-made croutons, I seriously must encourage to make them yourself 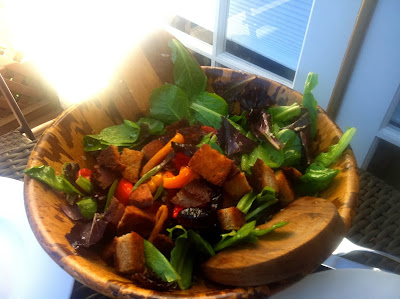 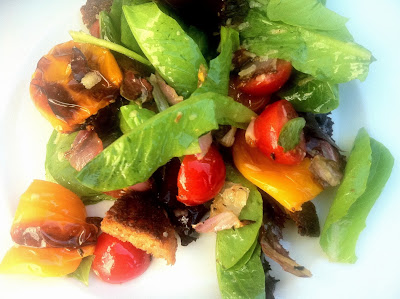 I cut the tiny peppers in two, took the seeds out and roasted them with the roughly chopped red onion, plenty of olive oil and some dried herbs (thyme and rosemary I believe it was). At the end of the roasting time (it should take about 40min in total) squeeze some lemon in. I picked my lemon straight from the tree in the garden - and this is one of the reasons why I would live in LA. I made the croutons by frying cubes of bread in very hot olive oil until brown on both sides. Then you need to take them out and drain them on some paper to remove excess oil, and add a bit of salt. Serve all this on a bed of lamb's lettuce and cherry tomatoes with your favourite vinaigrette. Unfortunately, Simone will not give me the recipe for her special vinaigrette, as she is convinced that one day she will bottle it and make her millions. She is probably right
Posted by zuzazak at 15:05