An Autumn stew with beans and pumpkin

I was in Athens the other day visiting my heavily pregnant friend and wanted to make a huge pot of something that we could eat for dinner, then freeze for the busy days ahead. It's getting a bit chillier, even in Greece, so I was thinking warming and substantial dishes, and of course, the French cassoulet came to mind. The last time I made it was in the French Alps, and we ate it with great joy and relief almost (as well as fresh baguette), after a day on the slopes. But this was Greece - a different climate, different ingredients, so I reworked the recipe to include some lovely pumpkin that we found at the market, two types of dried Greek beans (black eye beans and another type I didn't recognise), Greek sausage with leek (rather than the traditional French garlic sausage). I made the recipe skinnier not for health reasons but because of the temperate climate here, so gone is the duck confit and goose fat and in come more meditterean vegetables. The French bouquet garni was also replaced, with local, wild oregano. This isn't fusion cuisine; this is using local, seasonal produce and creating a new version of a dish, based on a classic 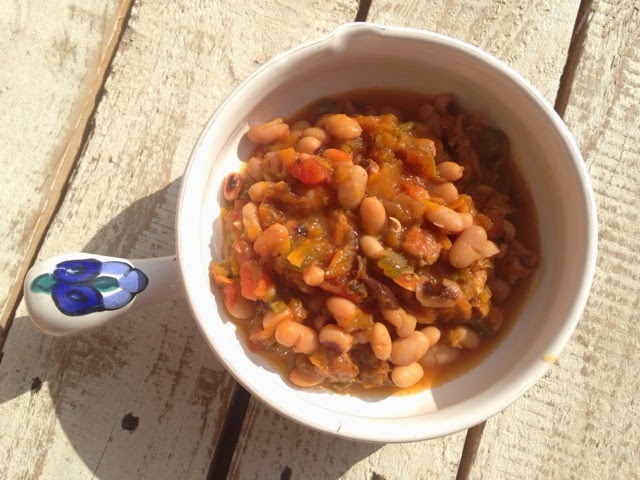 Soak the beans overnight, then cook them slightly before you start the stew - about 15 minutes of simmering in salted water, then drain. Fry the chopped sausages first, in some of the olive oil, then remove from the pan, Add the lardons and the chopped onion next, fry for a couple of minutes, then add the grated carrots, chopped celery (which, incidently, looks completely different in Greece) and keep frying on a low heat, stirring now and again. After about 5min add the tomatoes, beans, white wine, garlic, herbs and spices. Bring to the boil then turn the heat down again and allow to simmer for about 10min or until the tomatoes start to disintergrate. Add some water and put the sausage back in the dish. Allow to simmer for about 45min, before adding the pumpkin and more wine/water if needed. After another 45min season the stew with plenty of salt pepper and taste. Perhaps it needs more paprika or oregano? I'd give it another half an hour on top of that before serving with crusty bread - so 2 hours of cooking time in total. The ingredients down there are approximate, as usual, so just experiment with the flavours and go with the flow