I have eaten some great food in Bangkok. However, first I just want to mention some of the weirder stuff that has challenged me in one way or another.

We're staying at Pantip Court on Sathorn Road (great hotel btw and good value for money), and every morning we have a breakfast buffet including pastries, cereal and fruit. Being me, I have been going for the odd soup in the corner that everyone seems to avoid (seriously, in 3 days I have not seen anyone, including the Thai guests, anywhere near it) 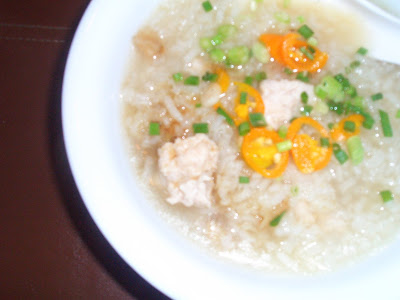 One day, that's congee with chicken (rice cooked with chicken and lots of water until it gains a gloopy consistency), spring onions, and pickled, mild, yellow chillies, with some soya sauce for flavour. And on another day, it's just boiled rice (with lots of water left in, again), with little fish bits, crispy bits of pork rind and fishy powder to add flavour. Sounds a bit disgusting, I agree, but I have really got into this savoury porridgy-type breakfast, and I'm actually looking forward to seeing what variety of rice soup they have this morning. I may even try and make it at home, as it looks really simple - boil some jasmine rice in lots of water for ages, either with bits of chicken or without, then add whatever you want to flavour it - some fish sauce, soya sauce, chillies, fishy bits, bacon bits, spring onion or chives... 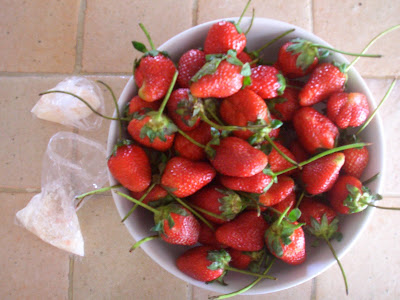 Next, I have to mention the fruit - not really the fruit itself, but what they serve it with - a mixture of sugar, salt and chilli flakes. My family, being open-minded, tried it, and declared it an abomination, but I have to say I really like it! Of course, you won't like this first time round - it's weird - but if you keep eating it you begin to enjoy the balance of sweet, salty and spicy - it's really refreshing and will see if it tastes as good in the UK once the strawberry season starts...I may try it with apples in the meantime

And, finally, I tried something I have wanted to try every time I have been to Thailand (and that's quite a few times) but I could not bear to even pick up...which makes trying quite difficult as you can imagine... as you can see down below my little brother kindly helped me with the picking up part this time, and, after a moment of apprehension, I was away! 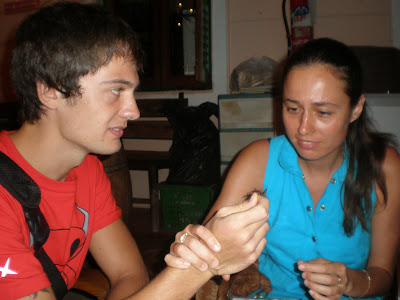 That's right, I ate bugs - the lady selling them gave us a bit of everything, even things I would have thought I didn't want to try - grasshoppers I was ready for - but larvae, maggots and fly-like-things I wasn't 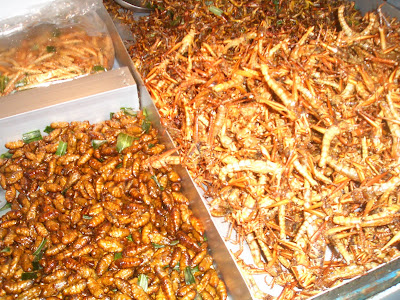 However, it turned out that the grasshoppers were the most difficult to handle  (I think it's the faces), the maggots and larvaes - delicious! I had loads of 'em with my singha beer. The ones you can see up there, the fat ones, were really tasty and meaty inside

Finally, something on the more pleasant side - I have a restaurant to reccommend is you are staying anywhere near the Sathorn Road - it's certainly not very cheap - a meal for 4 with some wine cost int he region on 3000 baht, but it's modern and trendy with lots of young Bangkovians (is that what you'd call them?), as well as more the more chic types of tourists from nearby hotels. It's called "Pandanus"  and the address is 50 Soi Nunta, Sathorn 1 Rd. 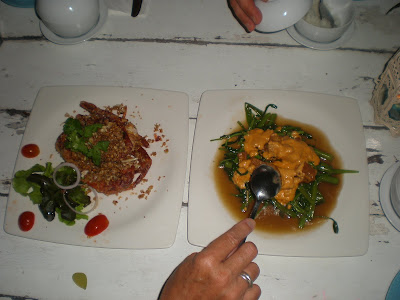 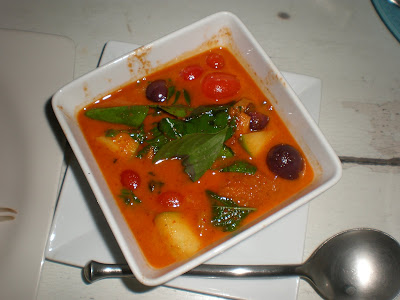 The duck red curry you see up there was superb - finally something properly spicy and not watered down to Western tastes! It had grapes in it as well, which I hadn't come across before in red curry but worked really well. And above that, you see soft shelled crab with chillies and garlic - yum - and morning glory with tofu in peanut sauce - simple and delicious - I think you make do this in the UK by substituting the morning glory for something like spinach or watercress.

I really must get a new camera, as mine only has 3.2 megapixels (I have recently been informed that this is ridiculous) so can't really be expected to get accross the spirit of the food as well as I'd like it to. I was going to get one in Thailand, but it turns out they are they same price as in the UK. It's on my to-do list anyway.