How can you not want to make cakes with a name like "nun's farts"? Well, actually I imagine some people might not find the name that appealing, but for me, along with the simplest recipe in the world, it was a "fait accompli", or something like that. Now, "pets du nonne" often come in pastry, but this recipe I found in the Green'n'Blacks cookbook, is a much lighter version. I adapted it slightly - firstly I didn't use angelica, as I couldn't find any anywhere. Then, I substituted walnut bits for almond flakes, which worked fabulously well, even if I do say so myself 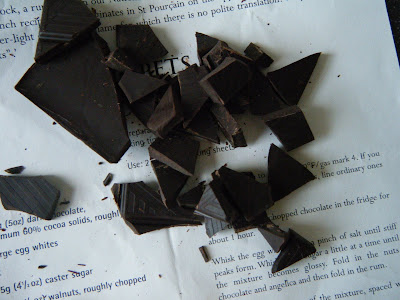 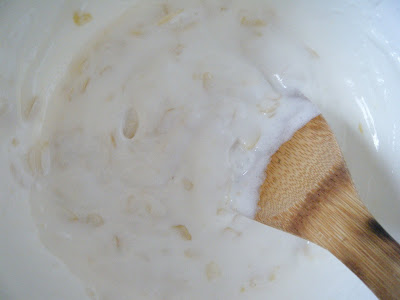 You simply beat the egg whites and salt until they form stiff peaks, as when making meringue. Then start whisking in the sugar a bit at a time. Finally, fold in the almonds, chocolate which has been broken up into little bits, and the rum if you are using it (I used Morgan's Spiced). Line a baking tray with foil or baking paper and grease slightly - this is something I didn't do and I ended up with a few broken cakes, they are so incredibly delicate that you don't want to be prising them off at the end. Put little blobs of the mixture onto the tray, making sure that they don't touch. Then bake in a pre-heated oven at 180 degrees for about 8 minutes. Turn the oven off and leave them in there for at least an hour, I left them for two 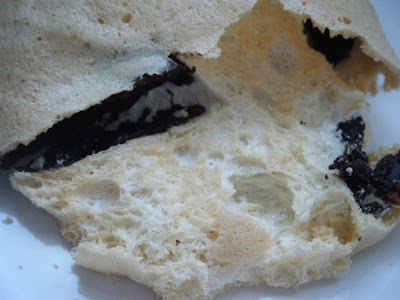 That's a broken nun's fart up there. This photo shows much more about these cakes then the ones that look whole and pretty, as they are no different to meringues on the outside. Yet on the inside the melted chocolate, delicate almonds and creamy meringue have a right old party. I am no baking queen but these will definitely become part of my repertoire - I love simple recipes and that taste amazing, and these fit the bill perfectly