The cuisine that I remember from my childhood in Poland was always seasonal. We would eat this kind of cold soup on hot summer days, sitting under a fruit tree in someone's garden or dacha. You can use all sorts of fruit - sour cherry soup is one of my favourites, but these type of cherries are practically impossible to get hold of in the UK. Strawberries by themselves make a lovely, sweet soup, but it lacks a certain depth of flavour, whereas adding rhubarb gives it a sweet-sour taste that we poles love so much 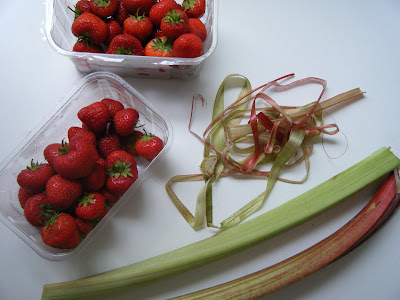 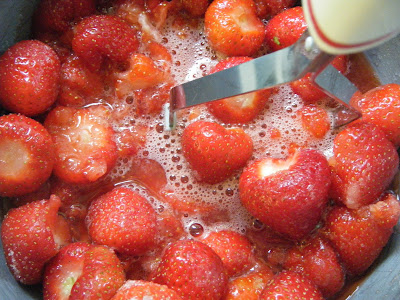 The above quantities make about 8 portions. You start off by peeling the rhubarb and cooking it in the water, with the cloves and vanilla, until soft, which takes about 20 minutes. While it's cooking, mash the strawberries and sugar with a potato masher. Add these to the pan. Put the heat on low and cook together for at least another 20 minutes. In the meantime, cook the pasta shapes in plenty of water with some salt in it, as you would normally. I used sconcigli, which worked fine, but it would have been even better with smaller pasta shapes. Then let the soup cool - my mum always puts it ouside for an hour - before  adding the cream. Serve the soup at room temperature, on top of the pasta shapes 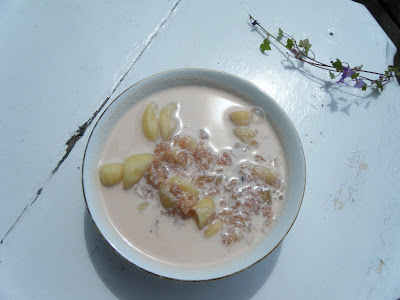 As you can see, it's like summer in a bowl. Needless to say, this isn't the sort of soup you would serve as a starter - it should be served during the day, as a light lunch, on it's own. I have never known any child that doesn't love this soup, and some people, like myself, never quite grow out it
Posted by zuzazak at 14:14