Spain feels so far away now. It was an amazing holiday, I haven't laughed so much for a long time, and will always have fantastic memories of chilling by the pool with sangria, strolling around Valencia at night and singing along to crap tunes while driving around. Even La Tomatina seems quite funny now (though at the time we all thought we were going to die). After moving flat, being back at work for a few weeks, and going out just a little bit too much, I am ill and ready for another holiday. But there's a couple more things I would like to tell you about, from the Spanish trip. We were cooking lunch every day, and more often that not we made our version of patatas a lo pobre, with a big salad - its ridiculously easy to cook and it felt right eating it in Spain. We adapted the recipe slightly from day to day. So the one below didn't have any peppers in, another day we may have skipped the chorizo. I found rosemary growing near the villa, and this was a perfect addition to the traditional recipe 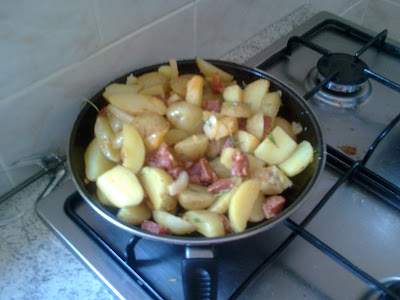 You boil the potato slices for about 10 minutes and at the same time fry the chopped onion in another pan. Add the chorizo and rosemary to the pan for about 3 minutes before adding the potatoes, and green pepper. Cook until the potatoes have browned (about 15 minutes). It's fantastic served with aiolli (Spanish garlic mayo) 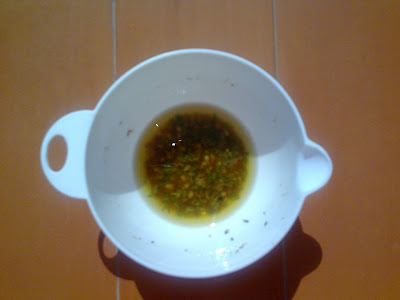 That up there is a delicious vinaigrette we used for the salad. As usual, the proportion of the olive oil to the red wine vinegar is 3/1. Then I added a crushed garlic clove and fresh thyme leaves, which I also found growing in the wild. Salt, pepper and a pinch of sugar, and it's done. It's best to leave this to stand for a little while to let the flavours fuse together. I love this kind of simple, rustic food because it kind of makes me feel close to nature

Email ThisBlogThis!Share to TwitterShare to FacebookShare to Pinterest
Labels: potatoes