The Move and El Molinon in Valencia, Spain

Oh it hasn't been easy. I have been buying a flat, and the dates had moved forward so many times that I had to exchange while I was on holiday (my phone bill is going to be humongous). This was further complicated by the fact that someone was moving into my old room on the day I went to Spain. And that I didn't know what to do with all my stuff for ten days. But somehow, miraculously, it's all sorted now. Although, I still have no internet, fridge, or washing machine. So not much cooking going on, as you can imagine. I am living off lahmajuns from the Turkish restaurant down the road (Cirrik restaurant - £2 a pop!). I also lost my camera to the chaos for a little while, so I don't have a huge amount to report on from Valencia, sadly. But one thing I could not miss out was the best meal of the holiday, at El Molinon (Calle de la Bolsería) 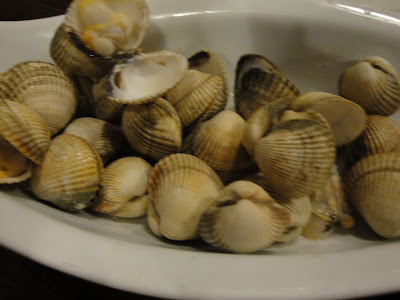 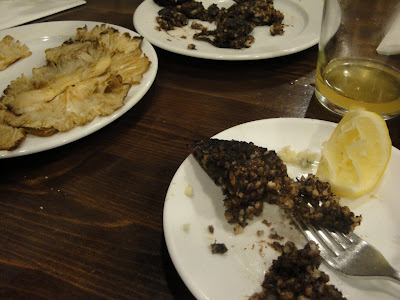 As I didn't have my camera, I asked my friend to lend me hers and email the pics to me asap. She had problems with her PC, therefore I don't have all the pics. Unfortunately, the photo of the "strong cheeses" has been left out. I cannot describe to you the maturity of the cheese that we had on the plate without being suspected of gross exaggeration. But it was nearly walking off the plate. Perhaps one day I'll get this pic and then you will believe me. You will also not see the most amazing duck pate in the world, becasue we ate it so fast that I completely forgot I had a camera on my lap ready to snap! It was that incredible. That's the black pudding up there - they used a delicious rice (which the area is known for) and cinamon I think, though perhaps it was a combination of spices. To my annoyance, my friends who thought they didn't like black pudding couldn't get enough of it, so I didn't get to trough it all. Every single dish was superb really. If you put a gun to my head and said that I had to criticise one dish (lets be dramatic for a second) I would say that the mushrooms were a bit bland. That's it. That's the only criticism of this place. We washed it all down with delicious young cider. Seriously, if you go to Valencia, don't miss this place! It's also in a cool area with lots of bars, so the perfect restaurant to go to before a night out