The best beef bourguignon recipe ever

I realize that that down there doesn't look like much, but it was the best beef bourguignon I have ever made, so I have to share the recipe with you quick before I forget it, as it was one of those instinctive, improvisational ones 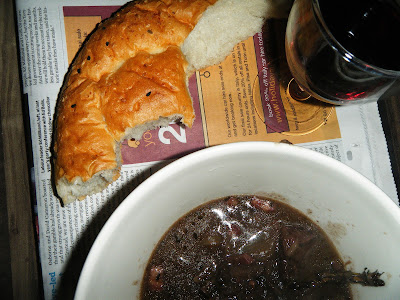 I have a feeling the reason it was so good was because I bought amazing stewing beef from Broadway Market, so it was made from happy cows. Or perhaps it was the cup of lamb stock I added, because I didn't have any beef... whatever it was, I hope we will all be able to replicate the magic by following this recipe

Brown the beef in the olive oil, and fry the onion separately until golden and even a little crispy in places. Add the onion to the beef along with garlic salt, pepper and flour. Once you have mixed it all in, it's time for the wine, stock, bay leaf, thyme and lemon thyme - bring to the boil. Turn the heat right down and allow to simmer for at least an hour. Fry the pancetta in the same frying pan as the onions were in previously and after a couple of minutes, stick the shallots in there too. After about 20min, the pancetta should be crispy and the shallots golden - time to introduce them to the beef stew. At the same time, add the mushrooms. Cook for a further 45min-1hour, then season one final time before serving. The first night Ruby and myself ate this with garlic mash, and the second night I had it with some Turkish bread. Ruby got lost in the depths of deepest, darkest Hackney on the way to mine (or the end of the world as she now calls it), and was in a bit of a state by the time I found her, but said it had all been worth it when she ate this beef bourguignon - you can't really get any more endorsement than that. Although, after a night with coco the kitten bouncing off the walls and about 2 hours sleep, I think she may have changed her mind again