I've been trying, and failing miserably, to give up processed sugar in January. I feel that I'm addicted to it, and I've come to point in my life where I'd rather not be addicted to anything. Being in my 30s has made me rather sensible it seems. Well, by comparison anyway. However, I've realized that life's a little sad without something sweet to nibble on with your tea, so I decided to experiment with some sugar alternatives last weekend 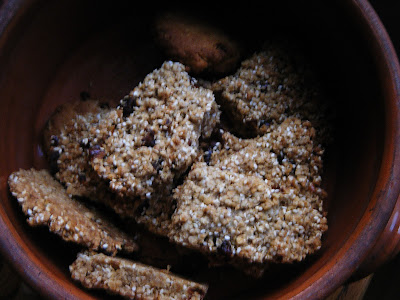 I made almond cakes with agave syrup and flapjacks with maple syrup. The almond cakes were tasty, and the agave syrup worked well, but they just seemed...(search fruitlessly for the appropriate adjective) a bit "meh" next to the incredible maple flapjacks. I clearly need to perfect that recipe. The flapjacks, on the other hand, they were something else - completely, unexpectedly glorious. I'm not just bigging myself up here, everyone that tried the maple treats has been enamoured with them and I had to promise I'd bring some more into work tomorrow. In fact, just a day after I made them, I've hardly got any left to bring, as my brother came over for dinner and took some away too. In short, a big success and I hope you try them! As usual with flapjacks, they're brilliantly easy to make 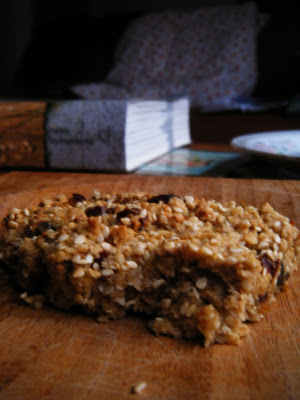 First, make sure you toast the sesame seeds on a frying pan on a very low heat, stirring regularly, in order to bring out their lovely flavour. When that's done, melt the butter in another pan, and pour in the maple syrup. Add all the dry ingredients and mix well. Transfer to a buttered baking dish. Bake at around 180 degrees C until golden - about 20min. Score while still hot, it will make things easier later. Happy February!