I've never cooked West Indian food before. I don't know why that is, because I do love it a lot. So when a guy at work suggested I try to make ackee and saltfish, I took it up as a bit of a challenge. I think I did pretty well - he said I did anyway, but maybe he was just grateful for the snack... I researched a few recipes beforehand and questioned him about his mum's special ingredients, because every mum has some tricks up her sleeve and that's where all the most important cook's secrets are kept (it's 'season all' by the way). The recipe down there serves 4 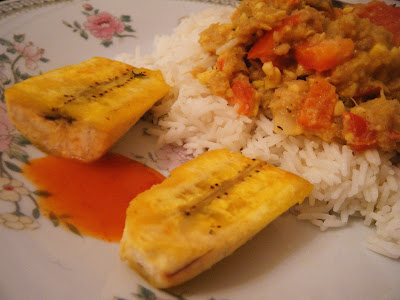 
Soak the fish overnight in cold water, then flake, taking out any stray bones. Fry the chopped onion and scotch bonnet pepper in some oil - I wouldn't use more than 1 pepper, it was pretty spicy (luckily, that's how I like it). If you want a milder dish, start with a half - they're fiery little things! Add the 'season all' and the flaked fish. Stir. Next, the red pepper, and after a couple of minutes, tomatoes, followed by the drained ackee. Simmer all together, stirring occasionally, for about 15-20min. Finally, season with black pepper and serve on top of boiled rice. I had some fried plantain on the side dipped in (ridiculously) hot pepper sauce. Unsurprisingly, the whole thing ended up so spicy that I was crying and could barely breathe. My brother was like "What on earth are you doing to yourself?!". What can I say? I think I may be a masochist