I don't know if you've heard, but I am trying not to eat (processed) sugar. It's become a bit of an ongoing joke at work, because I blatantly do still eat it. The point is, I am trying. I definitely don't eat it every day now. You may be thinking "why?". Well, it's because I feel that I am addicted to it - I swear that trying to give it up has been harder than giving up smoking. I also want to be free of the ups and downs in mood that sugar creates. I have enough of those without it, thank you very much. Having said all this (and now you'll know why this has become a bit of a joke), I have a friend coming round for dinner today, and I'd hate to deprive her of a dessert. I can't blog about any more sugar-free flapjacks, as the whole point of this blog is to introduce you (and me) to new things, to be creative and inspiring, so I will give up on the giving up for one night only. And probably a few other days and nights when I am tempted by something which is worth breaking the rules for. After all, life would be pretty joyless if you never broke your own rules 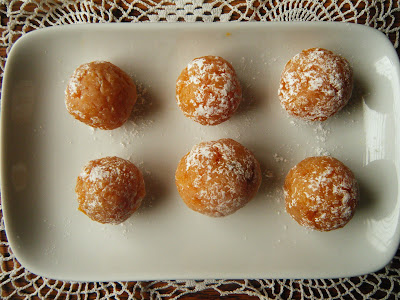 Apricotina are Middle-Eastern apricot drops, which take about 5min to make. You grab some dried apricots and mince them - I used about 150g and a blender, you could also chop them really finely. You then mix them with about half a tablespoon of icing sugar, kneeding them to paste, before rolling them in more icing sugar until they're pretty little balls. I stuffed an almond in the middle, Claudia Rodin (A New Book of Middle Eastern Cooking) suggests a mixture of ground almonds and sugar as stuffing. I think they're delicious with mint tea, my friend Mariana says they're like something from outer space
Posted by zuzazak at 15:39