I work in Isleworth, so for the past year and a half that I have been here, the only distraction I have had is walking around Tesco's in my lunch hour. You can, therefore, imagine my joy to have recently discovered Osterley Park - a neo-classical mansion house with massive grounds, with cows and ponies, and lots of old, old trees. There is also a farm shop. And it's cheap! So this is how I came to be cradling a marrow on my way home from work the other day, my bag having snapped under the strain of the huge vegetable 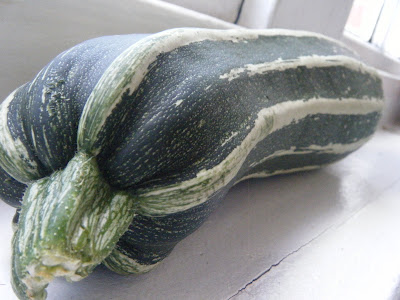 I have never cooked a marrow before, so I decided look to the internet for inspiration, as you do. What I found was a world disturbingly obsessed with stuffing marrows. After having carried the marrow like a baby for about two hours, I was reluctant to then start stuffing it. It seemed a bit harsh. So I disregarded all the suggestions, and went with my gut instincts to treat the marrow with a measure of tenderness. I split it into three and each piece made two portions of food. So for one pound, you're getting great value for money with this one! 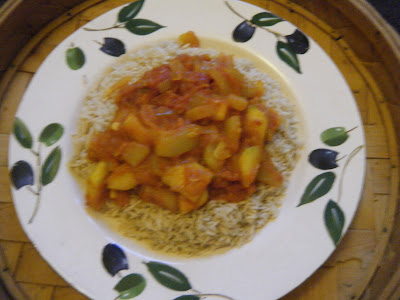 Fry the onion, garlic, ginger and chilli in the sesame oil for a couple of minutes, before adding the turmeric and chilli powder. Stir it in well and add a tablespoon of water, so that the spices don't burn. After another couple of minutes, add the chopped marrow. Make sure it's well mixed with the curry spices and oil, and cover the pan. You want to cook it like this for about 10 minutes, stirring occasionally. Finally, add the tin of chopped tomatoes and cinamon, and cook for a further 20 minutes or so. Serve with chapatis, naan or rice 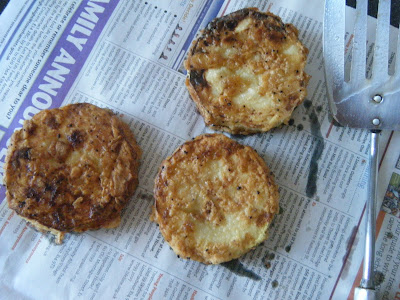 This was delicious and so simple to make. I combined the flour, salt, pepper and paprika, and beat the egg. The marrow was sliced into 2 cm thick pieces and peeled. I made sure the whole bottom of a frying pan was covered in the oil and heated it up to sizzling. The you dip the marrow slices in the egg, making sure all sides are covered, and immediately into the flour mixture. Lower it into the oil carefully, and fry until golden - it will take about 5-7 min each side. I used a Caribbean chilli sauce for dipping, a bit of sour cream wouldn't have gone amiss 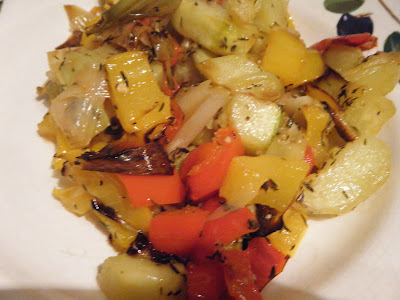 My friend told me that in Spain, marrow is often roasted with red peppers. I ate this as a light supper, then took the leftovers to work and stuffed them into a baguette with some goat's cheese for a delicious sandwich. I don't think I need to go into a great amount of detail about how I roasted the vegetables, so just a quick rundown - peel and chop the marrow into bite-size cubes; deseed and chop the peppers; and wash and chop the leek. The garlic cloves I bruised with the side of a knife and didn't even bother peeling. Cover everything in plenty of olive oil, and season with thyme (fresh or dried), as well as salt and pepper. Roast for about an hour at 200 degrees C, moving the vegetables around every 15 min or so, so that they brown evenly with lots of crispy bits. Long live marrow, the gentle giant!