My parents have decided to sell the house in Eastbourne. We knew it was coming, as they've been talking about it for a long time. When our Dreszcz was alive (that's our beautiful boxer dog), they said they were keeping it for his sake and they'd sell as soon as he was gone. But he's been gone for a long time now, at least three years... It makes sense to sell, as this house is way too big for two people, with 5 bedrooms, a massive, uphill garden that backs on to the South Downs, and a living room the size of my whole flat in London in the shape of an upside-down ship. As you might have guessed from my description, it's also a completely unique and perhaps slightly weird house, which suits our unique and slightly weird family. It's difficult to say goodbye to the feeling of space and freedom you get here. The seaviews aren't spectacular but they are there, and as we're on a hill you see so much of the sky here you sometimes feel like you're flying. Well, I do anyway. For me, this has been a place of healing. I came here after that traumatising breakup two years ago, and it helped me to want something better for myself, a lighter and healthier kind of life. What I didn't know then was that it wasn't just the breakup I was healing from, it was the relationship itself 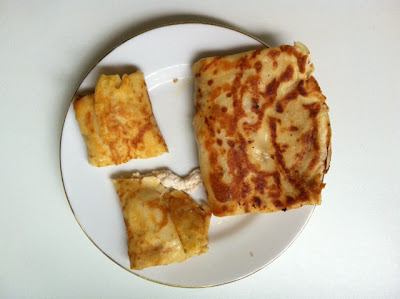 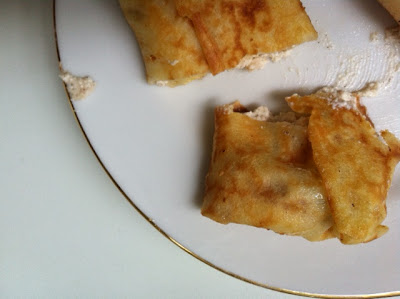 Of course, it's not just the bricks and mortar. When I come here, my mum cooks all my favourite food and we drink wine together, eat and chat. This is punctuated by walks on the Downs, films, and time on the massage chair and the jacuzzi bath. This weekend I brought my cat, Coco, here. After an epic four-hour journey (that should have taken half that time) I expected her to be thoroughly pissed off with me. But she fell in love with the place immediately. Today, my mum and I (mainly my mum) made Polish-style sweet cheese pancakes, just like I used to eat when I was little. You take some fresh cheese, the one we use is Polish "twarozek", and mixed it with some yoghurt, but I believe that something like ricotta would also work well -you would not need to mix ricotta with anything as it already has the right consistency. Add a teaspoon of cinnamon, an egg yolk, lots of raisins, and sugar to taste. Once you've made the pancakes (add extra salt to the pancake mix for that Polish sweet-salty flavour), put some of the filling on one side of the circle, in a fat line, and fold the side it's closest to. Next fold in the two sides and roll, like a tortilla. For ultimate crispy indulgence, fry the pancakes again, as a whole, before eating
Posted by zuzazak at 08:35

Email ThisBlogThis!Share to TwitterShare to FacebookShare to Pinterest
Labels: pancakes