The best food discovery I made on my holiday in Sardinia has to be "Bottarga". The discovery was made on the second night there, when I couldn't tear away myself from the clam shells that were covered in it. It's like cat nip, I remarked to LT. So he enquired about this magic substance, and so I was introduced to "Bottarga". It's dried fish roe - I forget from which fish - and you can eat it grated on spaghetti (with clams) or as a starter. This was a salad made from bottarga slices and celery, for instance 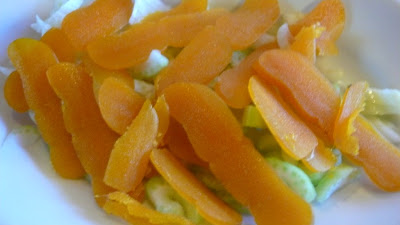 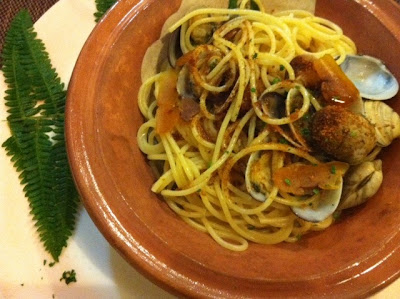 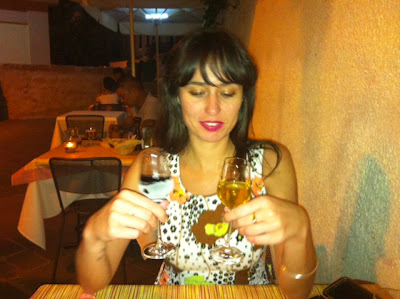 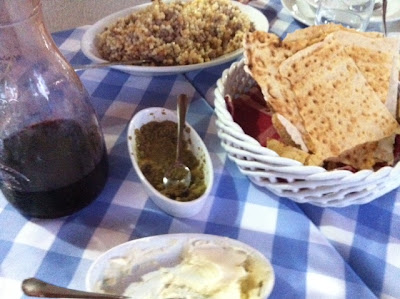 ﻿I prefer it with clam spaghetti. Mirto is a drink made from the myrtle plant. The red (black) one is made from the berries, and the white from the leaf. This is the typical post dinner liquor round these parts, and it tastes different everywhere you go. We didn't like the red one so much on our second night, yet when we tasted a home-made version in an agriturismo we were staying at, it was delicious (and much stronger). One of the reasons I would recommend staying at agriturismos in Italy is the food. In the typical Italian fashion, it always starts with an antipasti course, followed by first course of rice or pasta and then a meat/fish course. And then a little desert. And then some coffee and liquor.That up there is the first course and a delicious cheese spread made from Pecorino and Ricotta. They kindly left it for me during the primo, because I liked it so much. The primo is in the background there - it may look like rice but its actually a specifically Sardo type of pasta. This is was at Mulino Betzu, an extremely friendly agriturismo in the Oristano region, about an hour south of Alghero. That's as far as we planned our holiday, so on the owner's recommendation we headed down to Piscinas after, which is one of the most beautiful places I've ever been. Here we stayed in an agriturismo in the mountains, nestled between ghost towns which used to be mining villages, and close to the soft, green dunes of the coast. We ate a lot of wild boar, washing it down with local wine and Ichnusa beer. Then I got ill and wanted to come home
Posted by zuzazak at 09:31