Finally we have Summer in London! This means beers and barbecues, dinners outside on pavements, leisurely night-time strolls and plenty of ice-cream. At least for me. I don't have an ice-cream maker, so I just stir. It's still the simplest thing in the world 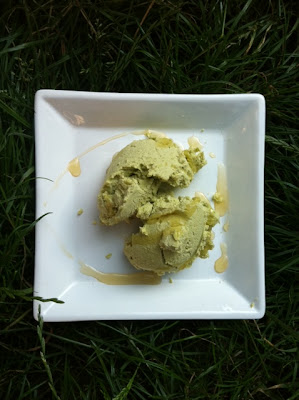 Although it's made from clotted cream I would still argue that this ice-cream is reasonably healthy since it contains no sugar and really good quality green tea powder from the Japan Centre. Incidentally, this is one of my favourite shops in London. Every time I come I get stuck in here for at least an hour, so I have to remember to never attempt to "pop in" on my way somewhere, because I will be late. This has happened more than once, the place is a time warp I blended the pot of clotted cream with a tablespoon of matcha and about 4 tablespoons of maple syrup. I put the mixture into a plastic box and into the freezer. Then, you just stir every half an hour until it's ready, more if you feel like it, for about 4 hours
Posted by zuzazak at 03:02