In my family "pascha" (the sweet, not the club) was considered to be a Jewish dish, but the recipe we  used is apparently Russian. Everything is quite mixed up in this part of the world. Especially the people, myself included. Although I'm Polish, my dad's mum was born in Lithuania, and his dad in Kazahstan. My mum's family have been living in this area (around Warsaw) for many years, although they do not look typically Polish. When trying to trace the family tree back, you get stuck on a guy a couple of generations back who was very dark and didn't speak the language. He ended up having six children with an ancestor of mine, and dying young, having never learnt to speak Polish, or even say whereabouts he actually came from. How you have six children with a man you can't communicate with is a mystery. Perhaps he was extremely good looking. And then there's no arguing or being disappointed because someone's views are so different to your own... on second thoughts, it could well be the secret of a successful relationship. Anyway, back to the probably Jewish, possibly Russian "pascha" 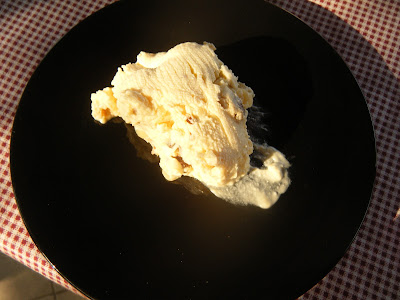 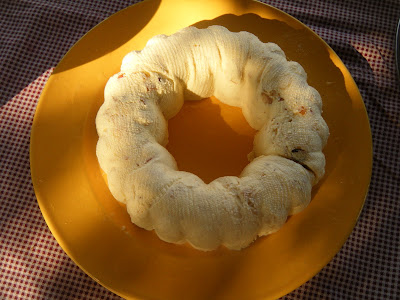 The only slightly complicated thing about "pascha" is the mould. You need a plastic one. If it has a lid, then you'll need to put some holes in it, so the juices can flow out while it's cooling. If it doesn't have a lid, then you'll need to put a plate underneath it while it is setting. Obviously, you don't want the thing to fall out when you turn it over, so it's best to press a plate onto it when it's still upside down, and only turn it over, once it's already getting solid - that could take about an hour. And then there's the gauze. That will need to line the "tin" (it's in inverted commas, as it needs to be plastic, though I do wonder if a metal one wouldn't be just fine, as long as you didn't touch it when it was hot), and there will need to be enough to cover the "bottom" too (and this is in inverted commas, because it will be the top, when you are making it). I hope I haven't confused you. Here's a photo, which may illustrate things better than all my words 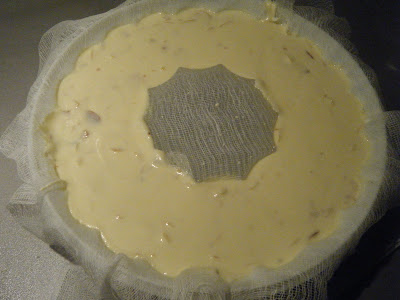 Right, put the soft butter in a large bowl. Start adding the sugar bit by bit and blending it in with a wooden spoon, followed by the egg yolks and white cheese - first, a bit of one then a bit of the other. Keep blending all the time. You could use an electric or manual blender for this, we preferred the good, old wooden spoon. When the mixture is creamy and fluffy, add the cream and pour into a large pan. In the meantime, toast the almond flakes. Now, you need to bring the mixture to boil, slowly, stirring all the time. This took us forever. My mum and myself took it in turns to stir, because it was so tiring, and took so much longer than we expected. Finally, when the bubbles appear, add the almonds and the dried fruit (all chopped up finely if it isn't small already, like a raisin). Now you can pour it into the gauze-lined mould, and take the steps I've already described. Cool for 12 hours. A lovely desert for a hot day
Posted by zuzazak at 05:41