All around the world, when ill, people eat chicken soup. One of the best is a really simple Polish/Jewish- style one called rosol. My mum and gran used to make it all the time when I was little. Once I was so ill that it was the only thing I was allowed to eat for three days. Since then, rosol has been a no-go for me. However, I have been feeling unwell for a day and a bit now, which has left me both starving and feeling a bit frightened of food, so chicken soup it is. I dug out a recipe that I found in the metro about two years ago - yes, I keep all the good ones - for a Yucatecan one (that's sort of Mexican, if you have no idea what I'm talking about). It's a bit like rosol, but tangy and spicy - my kind of thing. I went and bought myself a nice, free range chicken thigh from Ginger Pig (of course) , and then nearly burned the house down. I decided to make the stock while running a few errands, but I forgot to cover the chicken with water. As I said, I've been really out of it. Luckily, when I came back about an hour later, the chicken skin was brown on one side and the flat smelled really strongly of roast chicken but was all in one piece 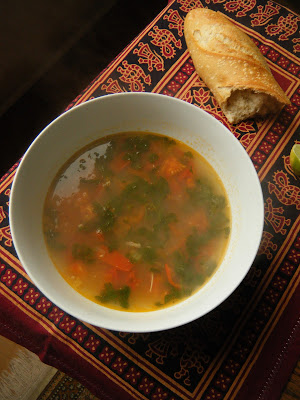 As you can see, I was so hungry that I imagined myself capable of eating a whole salad-bowl of soup. In fact, my stomach has shrunk and I was full after just a few mouthfuls, but that's not a reflection on its deliciousness. I will now happily eat it for the next three days

So, what I was supposed to do was to boil the chicken thigh, along with a carrot, a celery stick, half an onion and a bit of the coriander for about half an hour. On the side, you make a sofrito - chop and fry the following: the other half of the onion, the other carrot, a garlic clove, the chilli and the tomatoes with a teaspoon of allspice or all purpose seasoning. Then, take all the stuff out of the stock and mix the two (you may want to a ladle-full of stock to the sofrito first, to catch all the flavours). Simmer for another 20 minutes, and while that's happening, take the skin off the chicken, and flake all the meat off, adding it back into the soup. Squeeze the orange and limes in, add the coriander, season and serve 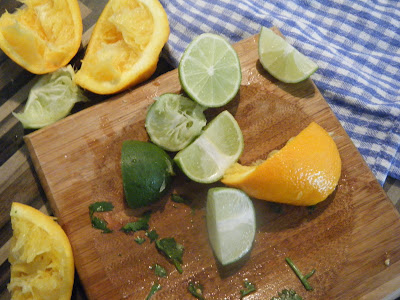 Strangely, I've found that being ill can give you clarity. Having some time just lying on your bed with nothing to do but reflect on yourself and your life is clearly good thing
Posted by zuzazak at 05:49