My no-sugar resolution has gone to the dogs. Or perhaps the reindeers, since it's all the fault of Christmas. It's difficult to work out exactly where this slippery slope began, but if I absolutely had to point my finger somewhere, I would point it in the direction of Astrid and her Christmas cookies So at least I can say I went down with style and good taste, rather than with a king sized tin of Quality Street 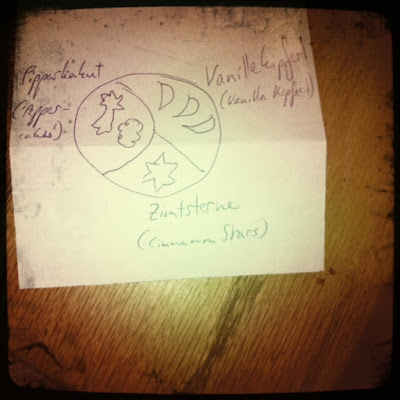 My favourite ones were the cinnamon stars, and so in the spirit of festive sharing, I now offer them to you, my friends...


Look no flour! So in fact they are just pure goodness. Ahem. Beat the egg whites until stiff, then slowly start adding the icing sugar. Put 4 heaped tbsp of the stiff mix into a separate bowl for the icing. Mix the almonds, spices and egg-mix. Slowly add hazelnuts until the dough isn’t too moist to roll. Roll dough to about 5mm thickness between layers of cling-film. Using a star shaped cookie cutter make individual cookies and put on baking paper on a baking tray. Mix the egg-whites you’ve put aside with the rum and cover the top of the cookies with a thin layer. Put the baking tray into the middle layer of the oven and bake for 10-20 min at about 150°C. Best made with friends and washed down with a light German red such as the Trollinger up there
Posted by zuzazak at 09:38