Japanese carrots with black sesame and spinach with white sesame

Since the excesses of Christmas, it's been all about Japanese food for me. So it was fitting that my friend Mariana invited me over to hers to make sushi on Friday night. It was loads of fun, and apparently I'm an extremely gifted roller. It must be a skill I acquired in my wilder days. Yet despite my natural talents in the sushi making department, I want to do it a couple more times before I tell you about it. Besides, we didn't have any fresh fish so it was mainly vegetarian sushi. That's some of it down there, that we had left over from last night. As I'm not one of those girls who is satisfied with a few bits of sushi for lunch, I also made carrots in black sesame, spinach in white sesame (both from Simply Japanese), and grilled some smoked mackerel which I served on a bed of brown rice. Well, its New Year's Eve, I have to get my strength up! 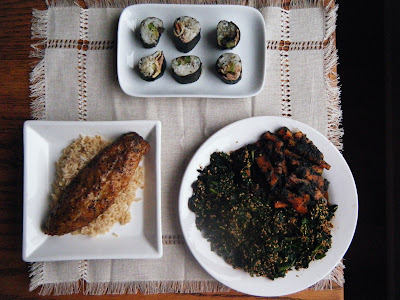 Blanche the vegetable for a few minutes, then cool. The carrots go with the black sesame - the seeds I bought were already in powder form, if yours are whole then blitz them in the food processor with equal amounts of maple syrup and soya sauce - for 2 carrots use 2 Tblsp of each. Squeeze the water out of the spinach and chop it up. Combine with the white sesame seeds which have been blended with soya sauce and maple syrup - for a whole bag of spinach I used 2 Tblsp of each. My white sesame seeds were whole so I ground them with a pestle and mortar. I think it looks prettier when there are still some whole ones about, like minature petals decorating the food. And since Japanese is supposed to be a feast for the eyes as well as the taste buds, I would go with them in the future. Miso soup would have completed this meal, but I forgot to buy it :(
Posted by zuzazak at 05:45