I can be such a bad friend sometimes. When I have a guest visiting me, I use it as an excuse to do stuff that I really want to do. Instead of trying to find out where my friend wants to go for dinner, what they really feel like eating on their rare trip to London, I give the impression that I'm asking, whilst making sure that the place I want to go seems by far the best option. And after a few months living with the resolution to limit my meat intake, I was dying to go to Buen Ayre on Broadway Market. I've never been here, you see, because you can rarely get a table if you pop in - it's very popular. And now I know why. The meat. And the wine 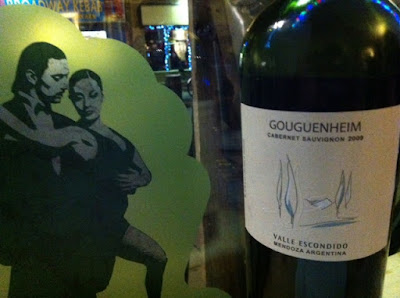 I completely forgot about this beauty from the Gougenheim Winery. A couple of years ago this was my favourite wine - all the memories came flooding back as if I'd just sat down to a meal with someone who had once meant everything to me but I hadn't thought of for a long time. Which actually happened later on this weekend, but that's another story. However, while revisiting old relationships isn't usually the cleverest idea (I should know, I've done it enough times), going back to old wines is precisely the opposite 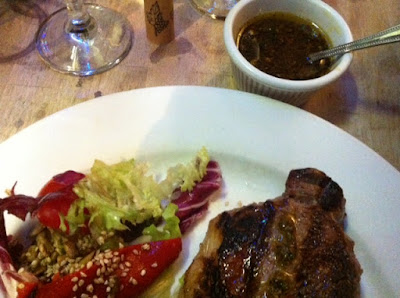 We shared the marinated ox tongue to start, with a side salad, and we both followed it by the smaller of the sirloin steaks. There's not much to say about that, because it was perfect. And we all know exactly what that tastes like. If you don't, then you'd better get yourself to Buen Ayre pronto! The staff are really friendly too, flirty without being obnoxious or sleazy. It was weirdly smoky when we went in, due to the indoor grill but they managed to sort that out pretty quickly. Pricewise, I'd say it's kind of average, £35 per head including wine
Posted by zuzazak at 11:34