Although reading cookbooks is one of my favourite things in this world, I normally struggle to find even a handful of recipes that I really want to try out. Yet there is one book that I have renewed three times already and never, ever want to return to the library - 'Simply Japanese" by Yoko Arimoto. I love the way it's all so simple, just like it says on the tin, yet each recipe is fascinating to me 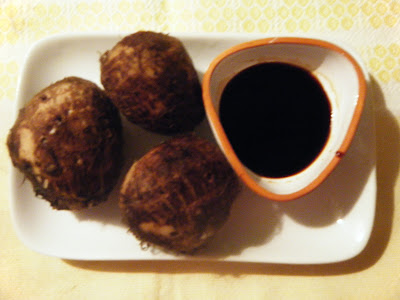 Today, I found some taro root in the Japanese Centre. I've never cooked taro root before. Yoko suggests microwaving or steaming for 20min, but I just boiled them for about 15min instead. She said that if you score them, then then you can squeeze them out of their skins easily when cooked. This was not the case. I was scraping the skin off with my nails and shoveling them into my mouth, after dipping them messily (read dropping) in the sauce. Slippery little blighters, those taro. If you imagine a woodland creature gnawing on some tricky piece of bark, trying desperately to get inside and eat the contents (perhaps some bugs, I'm not sure what woodland creatures eat exactly) then you won't be far off. I was ever so hungry, you see, after my hardcore Kundalini class. Finally, on the last one I got it - their slipperiness can work to your advantage - if you rub and squeeze them hard enough, their skin really does slip off! Hallelujah! My dipping sauce was a mixture of soya sauce and maple syrup, a variation on Yoko's yellow miso and maple syrup one, and they tasted like a welcome cross between a chestnut and a potato
Posted by zuzazak at 14:56